Lesley is a Barnard ’11 Graduate who majored in Urban Studies/Sociology and currently is enrolled at Baruch for an MA in Public Administration at the School of Public and International Affairs. She works for The New York Public Library as a STEM Coordinator.

I grew up in The Bronx and I didn’t have much but I always had what I needed. My father lived with me but didn’t take an active role in parenting–my mother did that. As I grew older, I somehow kept hearing that people like me couldn’t make it. I actually had a teacher tell me once that I shouldn’t dream to go to Harvard, that I shouldn’t set my hopes up. Luckily I was never one to let someone tell me what I couldn’t do.

Education was (still is) a big deal to me and so was giving back to the community. I made sure that my grades were the best that they could possibly be. I joined after-school programs that helped me with math and science. I was a strange child. I volunteered myself–mother never had to force me. So it made sense that when I got to middle school and high school I joined Arista, which is now called the National Honor Society. I did a lot of community service and I knew that I wanted to do positive things for people like me, people of color, people who needed help.

Then I got to college (I’d made it to the Ivy League after all) and I had a hard time navigating. It was the first time that I was very aware of my skin color, of my accent, of my choice of clothing.

I felt like I didn’t deserve to be there because everyone else was way more accomplished than I was. I was trying to find a sense of belonging and one of my friends convinced me to go with her to an LPC event. At first I was hesitant and wildly skeptical but then I saw that the organization’s values appealed to mine. Education, giving back to the community, women’s empowerment—I was sold.

I love working with youth. I believe that children and teens have very insightful things to say and I especially love working with youth who come from backgrounds similar to my own. I want to be the person that tells them that they can make it even when the odds are against them.
After graduating college I worked for a small non-profit in the South Bronx where I counseled teens, oversaw an after-school program, and ran parent and teen workshops on a weekly basis. Then I went of to The New York Public Library (my current employer) to create teen programming for neighborhood youth. Now I work as a STEM program coordinator, providing branch staff with the necessary tools to run STEM programming at their branches with their children and teens.

Eventually I’d like to work in more senior positions within non-profits that work with youth such as director, project manager, etc. I’m currently enrolled in a Master in Public Administration program and hope to use my degree to further my career.

Life as a Hermana

Being Intake Coordinator was very memorable. Being part of welcoming new Hermanas into the organization is rewarding because you help bring new life and new energy into an organization that strives to do the very best for people of color and their communities. 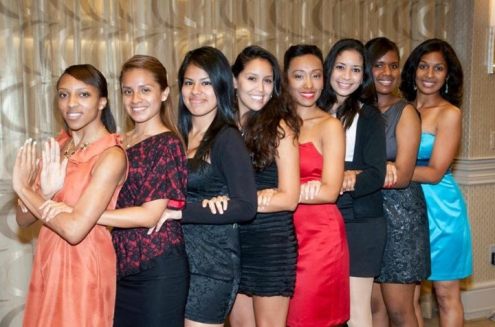 Experience as a Woman of Color

For me, the challenges have been subtle and also they’ve been so much a part of me that I don’t really notice them. For example, the fact that I have limited options in where I can live because of my income has been the story of my life. Sometimes when I’m on the train and someone asks for directions, they’ll tend not to listen to me but will listen to a fairer skinned person who repeated the same thing I just said. Also when walking on the street, it’s more common for someone of color to step to the aside and let me through than it is for someone that isn’t .

In my family, my mother and father disapprove of my natural hair. My mother is more outright about it, my father sort of just pulls on it, trying to straighten it.

How has being an Hermana shaped your life?

Being an Hermana forced me to work on what I’m not good at. After I crossed I was the only member on campus. I was forced to strengthen my interpersonal skills and to network with people I’d never met. Being an Hermana also provides a sense of purpose that aligns with my career goals of helping and promoting better resources for people of color.

What would you say to yourself when you first entered College/University?

What are your thoughts on the current political climate?

It makes me want to cry, but it also makes me want to make sure that I urge people not to let their fear force them into hiding. However, with tensions and race relations running so high, I wouldn’t be surprised if we have a second Civil Rights Movement.